cos everything falls in place

“Some people… some people like cupcakes
exclusively, while myself, I say,
there is naught nor ought there be nothing
so exalted on the face of god’s grey
Earth as that prince of foods… the muffin!”Girl you thought he was a man,
But he was a muffin,
He hung around till you found,
That he didn’t know nuthin’,

Girl you thought he was a man,
But he only was a-puffin’,
No cries is heard in the night,
As a result of him stuffin’, – Frank Zappa

It was a happy trippy scene, Joel was jamming Rock legend’s Frank Zappa’s 1970’s guitar solo of the ‘Muffin Man’ with just the 3 fingers he had left ( lost the last two in an accident). Freshly baked wholemeal Banana Chocolate Muffins steamed up the living room in front of the shattered glass of the fireplace. It was a frosty night, as it always is up in the heights of Tahoe, but we were kept warm in this melancholic mood singing, eating, jamming. Cali on the flute, the two boys on the guitar, and I on the bass. A short time back I was known as the Muffin Man, or Muffin Boy, where I helped bring the cafe bakery the Muffinry glory to some sweet & caffeinated goodness. I used to run deliveries for the muffins to nearby offices, the pet name probably came about out of convenience. All my random life experience all seem to work for me as contributing skills during my travels it seems. I didn’t quite have the right ingredients, but, hey, baking thousands of muffins over 2 years, you can’t go quite wrong can you. The guys were chomping down the muffins after a ghetto wholemeal giant beef pie, requested by the folks who asked me to cook something ‘Aussie’.

I made an impulse decision to take a day train ride down to the frigid freezing heights of the mountains just for a day as I was counting down my days left in California, and a close friend Jenny had said, Chris, you HAVE to see Tahoe before you leave America. When people say stuff with this firmness and determination, you HAVE to trust them.

So I did. All ready to get my butt frozen dry, sleep on the streets to save money, I made a last ditch desperate attempt on couch surfing to find someone kind enough to host me. I wasn’t very optimistic however, given that people usually write requests weeks or months in advance. Thank God for these guys who replied me on the very  same morning. Cali and Mikey picked up to their quaint rental cottage, and right out into the action for some trekking and rock climbing. Mikey is a ski patrol so he works in the winter season and has all these kickass Ski and outdoor gear which they were glad to share. The couple are super outdoorsy and everyday is out breathing the fresh pine filled air, or floating down the creek on the canoe. They did tell of a beaver story where they stealthily floated down the creek, and they lay an unsuspecting beaver, sitting in quite an obscene position, scratching the living daylights out of its nether region with much zeal. As they passed it, the beaver looked up. Wasn’t quite sure what to do, or feel (probably extremely embarrassed), it gave an unsatisfied loud growl and dipped its head and turned to walk away..Of course the natural thing Cali & Mikey did…point at Mr. Beaver and erupted into a fireball of laughter.

On my last day, Cali lent me her cruiser bicycle, to cycle to the bus station and have it parked there. So that I could go along the meadows and creek to explore. I came up with a sketch along one of the river beds meandering along fir and pine trees in the background, with snow capped hills in the background. It was the beginning of summer and much of the snow had melted into the rivers, hence it was an excellent time for the visit. 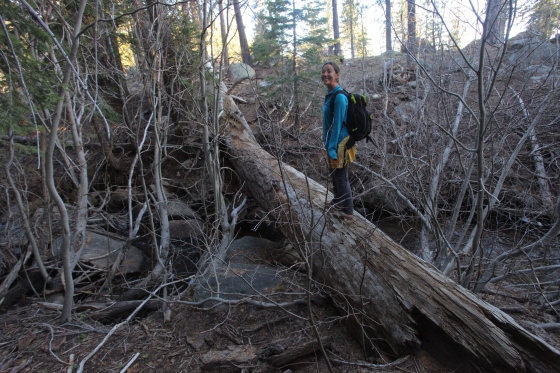 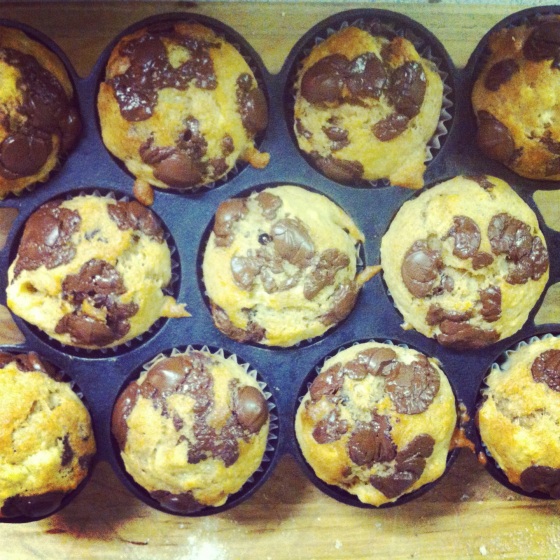 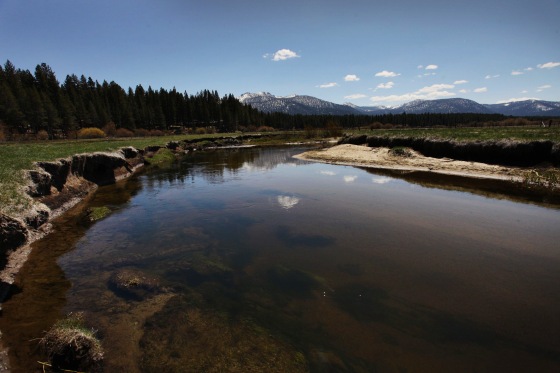 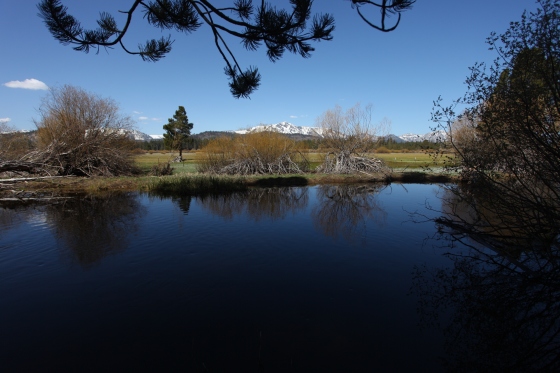 “I’ve been living close to the ocean and can’t imagine living anywhere else” – Maura.

I spent an entire day basking in the glorious sun in the comforts of the 60’s vintage styled cottage of white and ocean blue painted on neat slender vertical strips of timber with a glass of Merlot and my lappy penning down thoughts. I found solace in this sleepy town away from the city, just the way I like it, away from the hustle and bustle, in reach of the waters.

Awoken with a breath of crisp air, I headed down towards the sea where otters paddle about with such child-like adorableness laying back and propelled themselves lazily with their tiny little flippers, belly up. In 2 seconds the warm golden lit rays were engulfed by a fog that suddenly somber, like a imminent scene of a shipwreck from a movie. It too brought stole the warm and brought the chill right down to my toes. Just as quick as it came, it went away, clearing up to the blue skies. The bipolar weather of california of fog and gale winds were fairly confusing to the mind.

I headed back to the crib where little pieces of mermaid figurines, magnets, hung from lights, were stuck on doors, and scribbled on pastel colored designs. Maura loved mermaids, and always dreamt of seeing one. She worked in the Monterey Aquarium, where marine biologists and scientists educate people through the weird and wonderful world of the sea. Thanks to her, I saved $30 for the entrance. Maura was Jenny’s childhood friend,where they both grew up in the water, and thank goodness for her! My highlight at the Aquarium was the jellyfish which had incredible smooth form and floated around in water-space organically. Otters feeding, psychedellic jellyfish, Sharks, dogs and the cute kid at the bottom, whats there not to like at Monterey, and Carmel by the Sea, California. 🙂 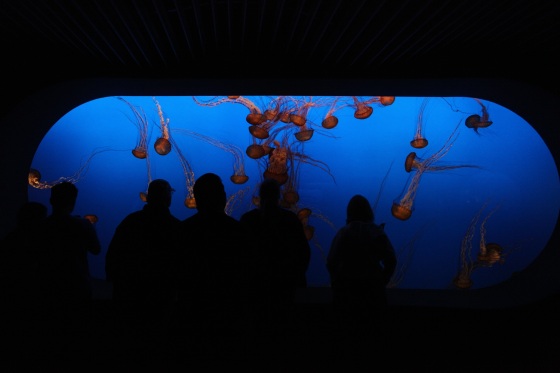 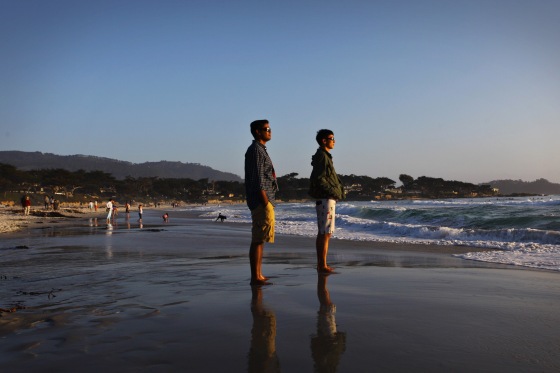 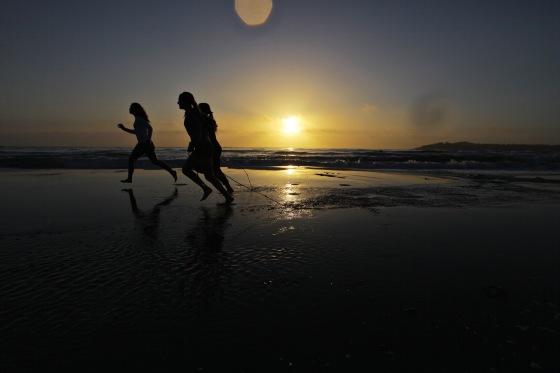 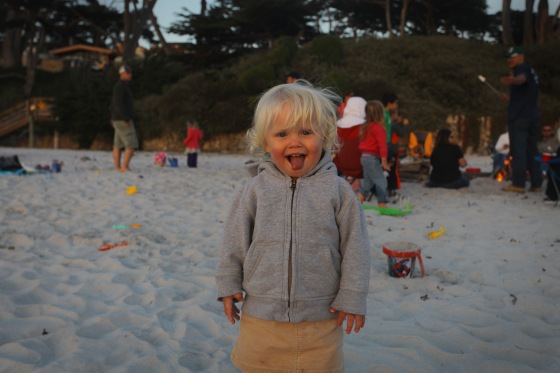